Unilever’s Hanneke Faber, president of foods and refreshment, and Robbert de Vreede, executive vice-president of foods, describe the ongoing work to expand the company’s portfolio into plant-based alternatives that are nutritious and kind to the planet

Unilever has embarked on a significant plant-based portfolio transformation. The move is partly driven by the commercial need to retain the attention of consumers as they move towards better-for-you and sustainably produced food and drink products and its social and environmental philosophy. The British-Dutch packaged consumer goods giant said that when it comes to its food and drink offering, the business is playing its part in creating products that are nutritious and kind to the planet.

“Every day, half a billion of our products are consumed, so we can and should lead the transformation of the food system,” said Hanneke Faber, president of Unilever’s foods and refreshment division. “It is our responsibility to make it easier for people to eat healthy, tasty and more sustainable foods.”

The Unilever philosophy is based on the notion that everyone everywhere deserves access to good food. But for people to get their fair share, the world’s food system needs to change.

The company explained: “[The food system] should be giving everyone affordable, quality nutrition, with plenty of plant-based choices. It should be serving consumers and producers fairly. And it should be cutting waste and promoting sustainable agriculture. It isn’t doing it yet, but we want to change that.”

Unilever argued that around two billion people are overweight while nearly a billion go to bed hungry, and yet a third of all food produced is lost or wasted. For Unilever, the Covid-19 pandemic has made it evident that the supply chain needs to be resilient.

“Our ambition is to drive a transformation of the current food system into one that is more inclusive, sustainable, efficient and nutritious,” said Unilever’s Robbert de Vreede, executive vice-president of foods.

De Vreede argued that innovating in the plant-based space is key to this transition. “With climate change a major threat to our food system, and the increasing link between animal agriculture and its environmental impacts, we believe our role is more vital than ever in diversifying food consumption towards alternative, plant-based protein products.”

Unilever’s message is clear. “Feeding the world is a global priority, and it needs to be tackled at a global level.” The company believes that the task requires international collaboration and determined action. “As one of the biggest consumer goods companies in the world, with a large food and refreshment portfolio, we want to make a huge impact through our scale and reach.”

A clear sign of Unilever’s protein portfolio transformation was the acquisition of Dutch business The Vegetarian Butcher announced in December 2018.

Jaap Korteweg, a ninth-generation meat farmer and a real meat lover, became a vegetarian and founded the company in 2007 to satiate his own appetite for quality meat-like protein produced without animals.

Products made by The Vegetarian Butcher were sold in over 4,000 stores in 17 countries. Korteweg said the deal with Unilever came at the right time to expand the business further through its international network in 190 countries.

With Unilever’s prowess, The Vegetarian Butcher teamed up with Burger King and rolled out The Vegetarian Butcher’s Rebel Whopper burger patty to 26 countries in the EMEA region. The brand also introduced a plant-based version of schnitzel, hot dog and bacon as part of its range of products fortified with iron and vitamin B12.

To this day, The Vegetarian Butcher continues to expand its presence in retail stores in many new markets, including the UK, Belgium and Germany.

Research and development in the plant-based space has seen Unilever introduce a host of new offerings.

For example, Unox added a range of vegetarian soups including pea, tomato with vegetarian meatballs, and vegetarian stews.

The sheer number of new products hitting the market within a year has been possible partly due to Unilever’s R&D capacity and deep-pocket resources. The company invested $94 million to create The Hive, a food innovation centre in Wageningen, Netherlands, which entered operations in December last year.

At The Hive, Unilever’s food scientists work with academic researchers, start-ups, and other partners to develop new products, including plant-based meat and sustainable food packaging.

And there’s more. The Hive is home to researchers investigating the use of new plant-based ingredients with untapped potential.

Unilever has teamed up with several companies and organisations aligned with its food ecosystem, social and environmental approaches. Its partnership with Algenuity is taking the company to explore the use of microalgae in future product development for its plant-based portfolio.

A British company, Algenuity specialises in developing microalgae for use in consumer products. The company uses Chlorella vulgaris, a nutrient-rich, plant-based source of protein and fibre that can be produced safely, with a low environmental footprint and in closed vessels.

Unilever and Algenuity say they recognise the key role that diverse, plant-based proteins like Chlorella will play in transitioning towards a new food system.

The Algenuity team is working with the R&D staff within Unilever’s foods and refreshment division at The Hive to explore ways of bringing foods made with Chlorella to the market.

Unilever told NutritionInvestor that its team believes there is great potential for using the microalgae in soups, mayo, mustard, pasta and ice cream products.

On the nutritional front, the company said: “We encourage people to make nutritious choices through clear labelling and balanced portions.

“We’re ensuring our products are providing essential micronutrients in a growing number of our products, reducing salt and sugar, and lowering calories. We’ve reduced the sugar content of Lipton Ice Tea by 30% across Europe, for example. We’ve also introduced a 110 calorie cap on our children’s ice cream.”

Unilever said it is tackling food waste across its supply chain and by helping consumers reduce the amount of food they throw away.

“To avoid the confusion around date labels that often causes people to throw away good food, Unilever signed the Consumer Goods Forum’s commitment to switch to standardised food expiry dates this year.

“And as a member of Champions 12.3, a global coalition of leaders from governments, businesses and civil society, we are dedicated to accelerating progress on food waste. For example, Hellmann’s Red and Green Tomato Ketchup is preventing up to two-point-five million tomatoes being wasted each year by working with its supplier to buck the ketchup convention of only using red tomatoes and using perfectly good green ones too.”

Unilever said that while supporting consumers in choosing healthy, balanced diets, the company strive to source ingredients sustainably and support farmers and others who make their livelihood from working with the company.

“By 2019 we had helped 793,000 smallholder farmers access initiatives aiming to improve their agricultural practices. To give an example, since 2014, our Wall’s brand’s work in Madagascar has aimed to improve livelihoods by supporting vanilla smallholders and the wider community.

“By the end of September 2019, the initiative had reached over 59,000 people in over 10,000 households, including around 7,800 smallholder farmers who had accessed agricultural training.”

Unilever has also embarked on a journey to becoming carbon neutral by 2030, as part of its support for a world of zero emissions by 2050.

“We’ve made industry-leading commitments on plastic across our business, and food packaging is no exception.

“For example, our new Hellmann’s 100% recycled and recyclable plastic jars and bottles, launched in the first quarter this year in the US and Canada, will save around 13,000 tons of virgin plastic per year.”

Unilever’s move to plant-based products and sustainable manufacturing has been noticed. In the July report by ethical investor network Fairr, the company ranked as the best-scoring food manufacturer in an annual survey of the top 25 global food retailers and manufacturers shifting towards more sustainable protein products. 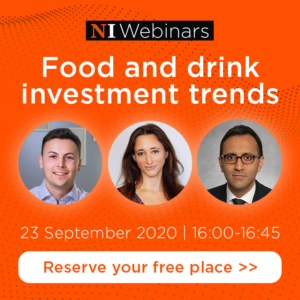